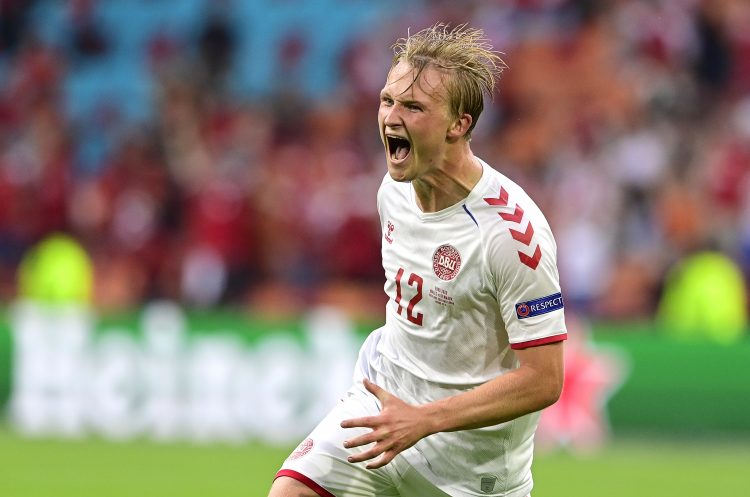 Kasper Dolberg, 23, played under Patrick Vieira at OGC Nice, and has enjoyed a fantastic summer whilst firing Denmark into the semi-finals of the European Championships. He had netted three goals in four games for Denmark, who were knocked out of Euro 2020 by England.

Vieira, 45, wants to reunite with Dolberg at Crystal Palace this summer having replaced Roy Hodgson at the club’s helm. The French tactician, who has made his return to English football, has been tasked with leading a mass rebuild at Selhurst Park.

He is expected to be busy in the transfer window after no fewer than 12 senior players have left as free agents earlier this summer, including Andros Townsend, Garry Cahill and Patrick van Aanholt. Goalkeepers Wayne Hennessey and Stephen Henderson have departed too.

As far as the incomings go, French teenager Michael Olise and American midfielder Jacob Montes have already been signed, but the higher officials at Crystal Palace know the new manager needs more signings to improve on the club’s 14th-placed finish last season.

Scoring goals were a big problem under Roy Hodgson, with the veteran English tactician more often than not set up his team defensively. The Eagles have been heavily dependent on Wilfried Zaha for goals over the years and the winger has delivered the goods consistently.

The signing of Eberechi Eze from Queens Park Rangers last summer has helped ease the burden on Zaha, but there’s no denying that the south London outfit are often toothless going forward when the Ivory Coast international is out of the team.

Christian Benteke suddenly caught form at the back end of the 2020/21 campaign, and as a result, has earned a contract extension from the club. However, with Zaha’s future far from certain and a serious Achilles injury sustained in May set to rule out Eze for the rest of 2021, Vieira must prioritise signing a prolific goalscorer.

Could Kasper Dolberg be the solution to the Eagles’ goalscoring conundrum?

Kasper Dolberg arrived at Euro 2020 following a disappointing campaign with Nice that saw him register only six goals and two assists in 25 Ligue 1 games. But he looked a different player for Denmark in the European Championship, impressing with his link-up play and clever movement in and around the box.

The 23-year-old bagged a brace in the big win against Wales in the Round of 16 and that shows something the Eagles are missing up front. The Denmark international would fit well in Vieira’s system, whilst adding some much-needed potency to Palace’s attack.

At 23, Dolberg still can get better and improve his overall game. However, one cannot rule out the fact that he’s a quality striker who is lethal in the box. Hence, Palace must secure his signature as quickly as possible.