The Nigerian striker is poised for a move to the Naples. 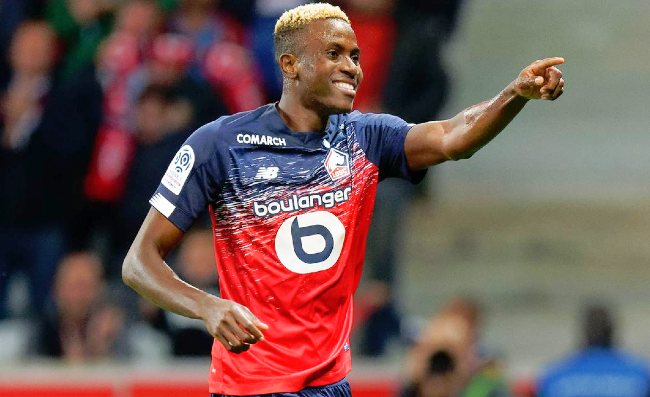 Napoli are reportedly inching closer towards signing LOSC Lille striker Victor Osimhen as the Nigerian is set to travel to Italy for negotiations. The Nigerian is being valued at €70m, and the Partenopei are looking confident of striking a deal with him. Osimhen is one of the hottest strikers in Europe at present, having been linked with a host of Premier clubs – Chelsea, Arsenal and Tottenham. However, the 20-year-old could opt for a move to Serie A if the negotiations fall in place.

Napoli had been linked with an array of prolific names lately, suggesting an overhaul this summer under the new manager Gennaro Gattuso. This also comes as a result of not being able to clinch the Scudetto in the past few seasons despite coming closer towards the glory. Besides, Arkadiusz Milik, the club’s current striker, has been linked with an exit from the Naples as Partenopei are uncertain on whether they can reach a new deal with him. Juventus and Atletico Madrid are said to be keeping track of the Polish striker, which means that Napoli could generate a large sum of money in the event of Milik’s departure.

Victor Osimhen – one of the hottest strikers

Osimhen took the centre-stage with his goal-scoring form, which helped Lille finish fourth in Ligue 1 this season. In all competitions combined, the young Nigerian was able to find the nets 18 times – two of them in the Champions League – with 5 assists. He has also been a regular for the Nigerian national team at this young age, racking up 4 goals in 8 appearances.

Napoli look to be heading towards the right direction and to a greater extent, the dawn of a new day. Under Gattuso, Partenopei have brought some possession to their style of play, but they also look to make use of good counter-attacking situations. Recent links with Cengiz Under also manifest the club’s intentions as they are looking to build the squad keeping an eye on the future.

While Jose Callejon could leave this summer and Dries Mertens has extended the contract, Napoli can find the freshness in the form of Osimhen to their attack. The Nigerian is highly athletic and can hold onto to the ball well, thereby bringing fellow attackers into play. He also poses the aerial threat and can run behind the defence to wreak havoc for the opponents. Under Gattuso, who is likely to remain as Napoli’s manager next season, Osimhen can learn to link up with the midfield as he had been widely used as a target man at Lille.

Napoli have made a late surge under Gattuso this season, winning the Coppa Italia trophy and a string of impressive displays since the return from COVID break. They are currently sixth in Serie A table and are working harder to seal a spot in the Champions League next season.