Manchester United could use Jesse Lingard as a makeweight in an effort to sign Declan Rice from West Ham during the summer transfer window.

Jesse Lingard, 28, joined West Ham on a six-month loan deal in January after falling down the pecking order under Manchester United boss Ole Gunnar Solskjaer this term. The midfielder has been in sensational form for the east Londoners with six goals and four assists, helping the Hammers fight for Champions League qualification in the process. That saw him being recalled by England manager Gareth Southgate for the FIFA World Cup Qualifiers last month after a hiatus from the international side of close to two years.

West Ham manager David Moyes has made no secret of his wish to make Lingard’s loan deal permanent at the club. With a year left on the England international’s Manchester United contract and the player keen to play week in, week out, the Red Devils are expected to explore the possibility of a Lingard-Rice swap deal.

The signing of Bruno Fernandes from Sporting Lisbon in January 2020 has proven to be a masterstroke by Ole Gunnar Solskjaer. The Red Devils have been solid as far as the central midfield department is concerned since Fernandes’ arrival, with the Portuguese international forming a brilliant understanding with the likes of Paul Pogba, Fred and Scott McTominay.

Not to forget, Solskjaer also has the likes of Nemanja Matic and Donny Van de Beek in central midfield. Van de Beek’s summer move to Old Trafford hasn’t gone as planned, with the midfielder forced to play second fiddle to the talismanic Fernandes. However, the Dutchman can only hope to finish the season strongly and start things afresh with Solskjaer’s side.

Meanwhile, Matic has been a peripheral figure this season, managing 25 appearances in all competitions. He has started just 10 Premier League games so far, with Solskjaer using placing his faith in Fred and McTominay in the double-pivot role.

Truth be told, the Serbian defensive midfielder lacks the energy and intensity to regularly operate in the deeper role in Solskjaer’s system. Plus, he will turn 33 in August; so the summer transfer window would be the right time for the Red Devils to replace the ageing Matic with a young holding midfielder.

Declan Rice would be a perfect replacement for Matic

In that regard, Declan Rice would just be the perfect player to replace Matic at Old Trafford. 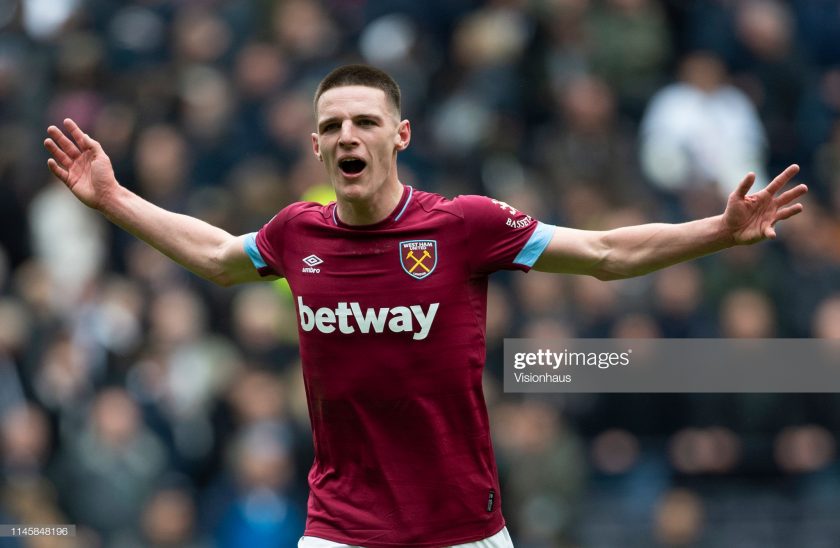 Rice has developed into one of the finest defensive midfielders in the Premier League and Solskjaer is believed to hold a keen interest in the West Ham star. The Englishman is exactly the sort of signing the United boss would love, as he’s a promising young player with the potential to be tapped into. The 22-year-old would be a hugely exciting addition to United’s midfield, providing energy, athleticism, skill and strength in abundance. Plus, he’s also adept at playing in central defence having majorly operated in that position during his breakthrough campaign with the Hammers.

The Red Devils need a midfield destroyer someone who’ll protect the backline with assurance, whilst allowing creative midfielders like Fernandes, Van de Beek and Pogba to the damage in the final third of the pitch. Rice suits that billing at Old Trafford and United must definitely explore the possibility of the Rice-Lingard swap deal, as not only would United address a big hole in their squad but also Lingard gets a chance to revive his career at West Ham.