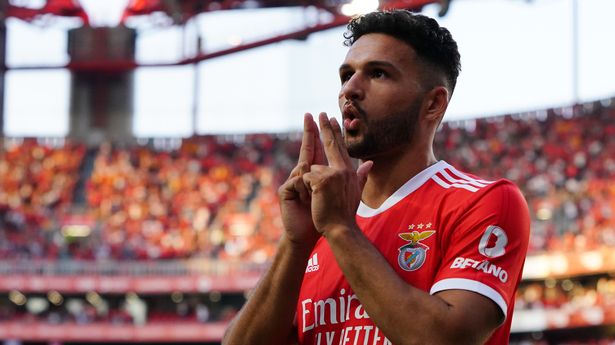 Goncalo Ramos, 21, has enjoyed a prolific start to the new season, with eight goals and six assists in 12 games across all competitions registered already. The youngster has stepped up at Benfica following the departure of Darwin Nunez to Liverpool and become the team’s main man in attack.

The forward’s stunning form at the club level has seen him receive his first call-up to the Portuguese national team as a replacement for Rafa Silva, who retired from international football, for the UEFA Nations League games against the Czech Republic and Spain. It has also seemingly alerted Manchester United, especially amid reports he is valued at around £25million by Benfica despite having an eye-watering £100m release clause.

The Red Devils aren’t the only club interested in Ramos. Bayern Munich are also tracking the Portuguese forward, while Newcastle United were linked with him in the summer.

Manchester United could do with continuing to strengthen this January after a solid summer, with Erik ten Hag bringing in exciting names like Lisandro Martinez, Tyrell Malacia and Antony, who look to have made a big difference for the Mancunian giants in their strong recovery after a disastrous start to the new campaign. And while the Reds’ new arrivals have helped Ten Hag’s side move up the table, plans are already being drawn up for the January transfer window.

Their first priority could be the signing of a new right-back—an upgrade on Aaron Wan-Bissaka, with Diogo Dalot having cemented his place in the first XI. As Wan-Bissaka is seemingly not in Ten Hag’s plans, it makes sense for Man United to bring in a right-back when the transfer window reopens.

The other area of concern for the Dutch tactician is attack. Cristiano Ronaldo is slowly edging towards the end of his career and his future at the club remains in limbo, after the Portuguese megastar failed to clinch a summer move away from Old Trafford. Anthony Martial has been out with an Achilles injury since the Liverpool game, while Mason Greenwood remains suspended.

Should the Red Devils go all out for Goncalo Ramos?

Goncalo Ramos looks like another fine player who could contribute well to Ten Hag’s revolution at Man United. He would challenge for a starting spot in the Red Devils’ side and would also allow Ten Hag to rotate without compromising quality.

Ramos has enjoyed a fantastic start to the season at Benfica and his goal-scoring displays have already caught the attention of several clubs in Europe. However, the Portuguese striker is under contract at Estadio da Luz until 2026, so Benfica are under no pressure to sell him. They would want to ignite a bidding war between interested clubs that shoots the player’s price up.

At 21, Ramos is a young, raw talent with massive potential to unlock. It seems like the Benfica marksman will be a man in demand come January, so Man United may have to move quickly if they are to get a deal over the line for him.