The Red Devils were held to a 0-0 draw at home by Newcastle United at the weekend, and they will have a point to prove after dropping points in the intense race for the top four. Erik ten Hag was happy with the performance but not the result that left his side fifth in the standings, three points behind fourth-placed Chelsea.

As a result, the Man United boss will be eager to get back to winning wins against Spurs, who are in a good run of form having won four of their last five games and level on points with Man City.

Scott McTominay is available once again after serving his suspension but Anthony Martial is still not fit to return. Christian Eriksen missed the game against Newcastle United with an illness but is expected to be in the squad to face his former employers. 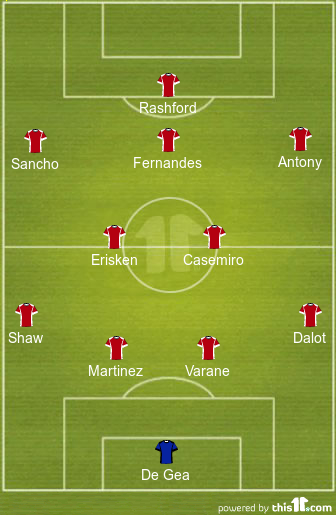 A quick turnaround in the Premier League means Erik ten Hag is likely to shuffle his pack to keep his squad fit and fresh. However, that won’t harm David de Gea’s position in goal, as the Spaniard hopes to keep back-to-back clean sheets at home in the league for the first time this season.

With Aaron Wan-Bissaka still injured, Diogo Dalot will retain his place at right-back, while Luke Shaw’s recent performances has seemingly moved him ahead of Tyrell Malacia at left-back.

In central defence, Raphael Varane is set to continue his growing partnership with Lisandro Martinez, and the pair will need to be at their best to keep an in-form Harry Kane at bay. Victor Lindelof and Tyrell Malacia should offer cover for the defensive positions for the home side.

Up ahead in midfield, Christian Eriksen will replace Fred as he is likely to recover from a bout of illness that kept him out of the last game. The Red Devils missed Eriksen’s incisive passing and vision to break down a stubborn Newcastle backline. They will hope the Dane’s quality on the ball shows off against Tottenham.

Partnering Eriksen in central midfield will be Casemiro, whose influence in the team has grown in recent games. The Brazilian’s presence in the team should give United’s backline much-needed security against a counter-attacking Spurs side.

Cristiano Ronaldo was substituted against Newcastle with 18 minutes left and could be benched on Wednesday. Marcus Rashford is primed to replace Ronaldo up front, with Jadon Sancho and Antony providing support from wide areas to United’s No.10.