Pep Guardiola is certainly frustrated with his team’s lack of attacking performance since returning from the World Cup. 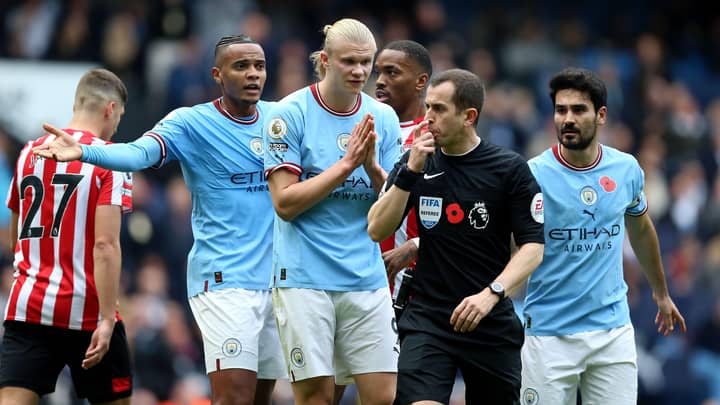 On the last day of 2022, the Premier League took on another dramatic twist for Manchester City, who failed to snatch an expected win against Everton. One of the worst teams in the current season of English football.

For the clash at the Etihad Stadium, manager Pep Guardiola executed only one change from the last game on Wednesday, with Bernardo Silva coming in in place of Gundogan. Another new addition was the return of Alvarez after the World Cup.

At the other end, manager Frank Lampard opted for four changes from the defeat against Wolverhampton. Calvert-Lewin returned after injury and Coady again became available. Gray and Godfrey also returned.

However, most important of all at Everton consisted of the return of the four-man line at the back, a fact that helped prevent the building of big attacking moves by Manchester City during the first half.

However, Erling Haaland’s goal difference was once again ensuring victory for Pep Guardiola. The scorer received a through ball from Mahrez in a great occupation of space in the penalty area and hit a first-time shot.

Despite the lead they had built up before the break, Manchester City created few chances despite dominating possession and were left wanting in terms of performance. The goal scored by Haaland was the only shot on target for City.

However, the second half turned out to be even more unusual due to the character of a game lacking the Premier League standard, with many fouls, the little technical resources being exploited and no real scoring chances for several minutes.

Until, in the 64th minute, Gray levelled the match when he shot into the left corner of goalkeeper Ederson after an assist from Gueye, intercepting Rodri in the attacking box to start the counter attack.

Manchester City followed with dominant possession and pressed harder in search of the winning goal, important to at least maintain the same distance from Arsenal at the top of the Premier League.

However, despite the efforts until the 112th minute of the match, Everton managed to hold the opponent’s offensive momentum and the Citizens had to settle for just one point, closing the year 2022 with a negative result.

Apart from the negative result, the fans certainly show concern about the collective performance far below potential and especially the lack of performance of the Belgian Kevin De Bruyne, who still has not found his rhythm after returning from the World Cup.