At the start of the season, United’s aim was to finish in the top four and play in the Champions League next season. Ole Gunnar Solskjær has managed to achieve that with the Red Devils finishing third with 66 points. However United’s ambitions are not limited to the top four, they want to win the Premier League. The current United team is good but to reach City’s and Liverpool’s level they will need to recruit new players. The January signing of Burno Fernandes is the perfect example of how good recruitment can help the team in a short space of time. Ole Gunnar Solskjær would want such players who can make a similar impact like Fernandes. Thus here we look at how Manchester United could line up next season. 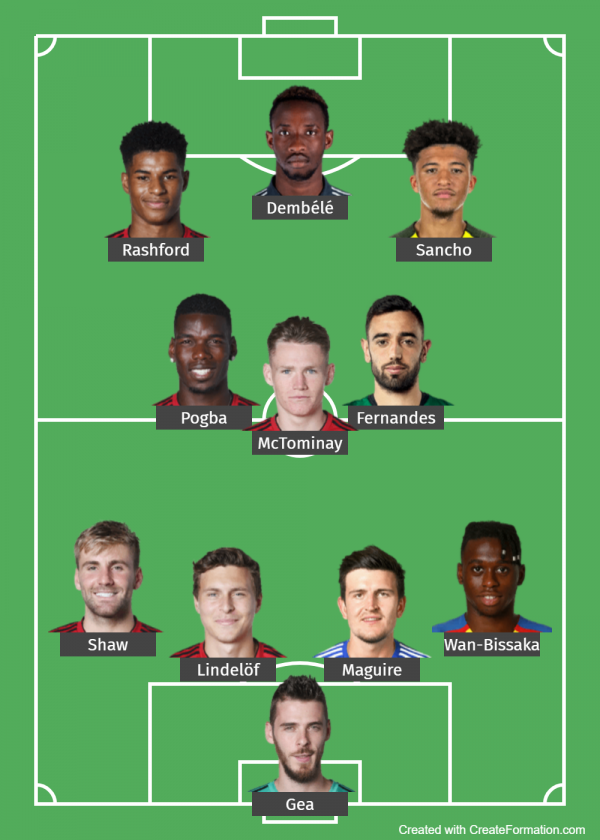 The Spaniard was hardly a shadow of his former self this season despite this Ole has shown faith in the former Atletico Madrid goalkeeper. On his day, De Gea is undoubtedly one of the best and most expensive goalkeepers. He has been loyal to United despite offers from Real Madrid and the Red Devils want to reward that loyalty. It is unlikely that Dean Henderson will be United’s No.1 next season. The 23 years old has been in great form for Sheffield while being on loan but it might be too soon for him to be No.1 at Old Trafford. It is likely that he will stay on loan for another season or he could be sold to raise funds.

The Englishman has been a regular for United this season and he will continue as a right-back next season as well. Wan Bissaka has been predominantly known for his excellent defensive skills but during the latter half of the Premier League season, he showed that he can be effective in the opponents half as well. He is physically strong and with time he will improve.

Manchester United signed Harry Maguire from Leicester City for a fee of £80 million and in the process, they made him the most expensive defender of all time. Though Maguire had his fair share of bad moments overall he has managed to improve United’s defence to a large extent. He will continue to be in the starting eleven as he is clearly their best defender as well.

The Swede’s partnership with Maguire has been very helpful to United. This season no player managed to go past the Lindelof in the Premier League. It is unlikely that United would want to upset Maguire- Lindelof partnership as these two have a good job, considering De Gea has been in poor form. Also, they have other areas to address and at least for this season, it is unlikely they will spend big on defence.

The Englishman relationship with his previous two United managers wasn’t good. However, Ole Gunnar Solskjær has placed his trust in him and he has done well to repay that trust as well. Though he has been injury-prone and Brendon Williams has done a fine job in his absence but it is unlikely that United will spend big on a left-back. When Shaw has been fit he has done a job for the Red Devils. He also has a very good understanding with Marcus Rashford on the left-wing.

The Frenchman was heavily tipped to leave United but now there seems to be a change in the mood around the club. Both Juventus and Real Madrid won’t be able to afford Pogba due to the current financial crises. With United doing well and heading into the right direction Pogba will stay at Old Trafford next season. The former Juventus midfielder’s importance to United is not something new and they will need him to dominate in the middle of the park.

This season Mctominay really managed to establish himself in the United first-team squad. The Scot is a hardworking midfielder who can be rough and strong as well. He is a player who is willing to do the dirty work for the team. Though Matic has more experience than him the Serbian is now 32. Ole Gunnar Solskjær would want Mctominay’s development to continue at the club, as he can be a crucial player for them in the long run.

These days it is not possible to have a discussion about Manchester United and the name Burno Fernandes does not appear. The Portuguese has been a revelation since he joined the Red Devils. The former Sporting midfielder has made a huge impact since he signed in January and he has brought back the belief at Old Trafford. There is no iota of a doubt that he is one of their best players and he will surely be in United’s line up next season.

The Englishman is one of the cornerstones on which Ole Gunnar Solskjaer has been building this United team. At the start of the season, United sold Romelu Lukaku and loaned Alexis Sanchez so that Rashford could be their main man for this season. Rashford hasn’t disappointed scoring 22 goals so far in all competitions. The United academy product is indispensable to this team.

It has been almost two years since United began their chase for Jadon Sancho. The Red Devils are clearly in need for more firepower on the wings and Sancho could just be the answer to it. The Englishman has consistently performed well for Dortmund over two seasons now. Though it could hamper Mason Greenwood’s development it is absolutely necessary to bring in players like Sancho who can push other players as well. In recent years clubs have made it difficult for United to sign players but when United want a player they usually get him.

Dembele has been a target for United for quite some time now. Though Anthony Martial has done well as a centre forward the Red Devils will still need a target man. In other words, they need a player who can bring something different to the table as a centre forward than Martial. Dembele has been a consistent goalscorer in Ligue 1, with the current financial crises Lyon won’t demand a very big fee for him. Also, the Red Devils could generate money for his transfer by selling on loan players like Sanchez and Smalling. Raul Jiménez is also a target but he is closer to joining Juventus.