Leicester striker Jamie Vardy’s fairytale career in the Premier League reached new heights in the Foxes’ convincing 3-0 win over Crystal Palace, as Vardy became the 29th player to reach 100 goals in the Premier League. The fact that he has achieved this in just 6 seasons and only made his top-flight debut at 27 makes this achievement all the more impressive. Here, we take a look back at some of the finest moments from one of Leicester City’s greatest ever players. 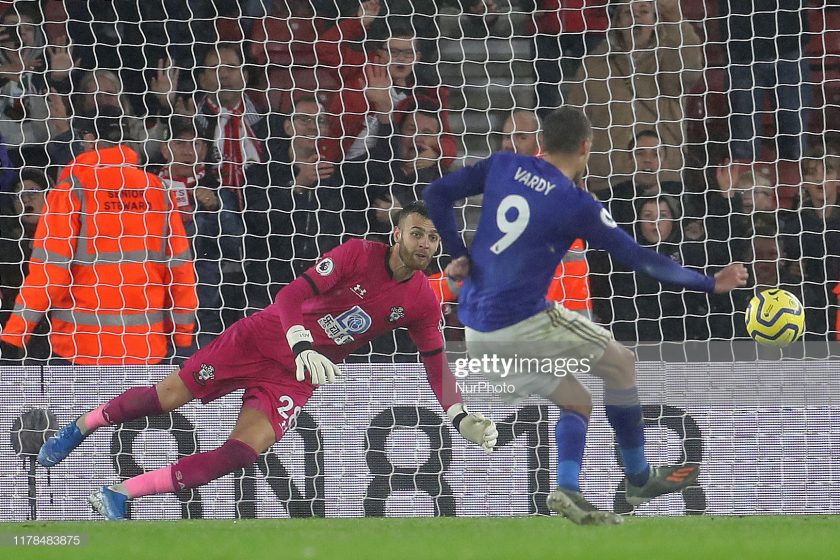 When Leicester returned to the top flight in 2014 after a 10-year absence, they lit up the league almost immediately with a thrilling 5-3 victory over Manchester United. Vardy scored the 5th and terrorised the United defence for the whole match, in a game where he truly announced himself on the biggest stage for the first time. You can watch goals from that match here.

Vardy has scored a number of spectacular goals over the years, but this was one of the easiest of the lot. A simple tap in following a dreadful defensive error from Palace allowed Leicester’s number 9 to join the 100 club.

It was in Leicester’s title winning season of 15/16 where Vardy enjoyed some of his finest moments, and this goal sits at the very top of the pile. A long ball from Riyadh Mahrez was met with an incredible long range half-volley from Vardy that flew into the Liverpool net. The Foxes ran out 2-0 winners and hastened their march towards the title.

We simply can’t mention Leicester’s title winning season without recalling the previous year’s remarkable escape from relegation that made Leicester’s triumph possible. In April 2015 Leicester played Burnley, in a textbook six pointer; simply whoever lost would be condemned to relegation. After a defensive mix-up from Burnley, Vardy pounced to knock in the winner, as Leicester scrambled to safety and Burnley were consigned to the drop. A truly vital goal in Leicester City’s history.

It just had to be, didn’t it? This goal marks what is easily the most iconic moment in Jamie Vardy’s career, as his astonishing scoring streak towards the end of 2015 saw him break the Premier League record by scoring in 11 matches in a row. It is a record that will take a long time to equal, as will the legendary Martin Tyler’s commentary of the landmark moment: “It’s eleven, it’s heaven for Jamie Vardy!”

Jamie Vardy’s still having a party!