Round nine of LaLiga has concluded and it produced some interesting results, most notable of which was Real Madrid’s first defeat of the season, which they suffered against Mallorca who humiliated Los Blancos at Estadio de Son Moix. FC Barcelona on the other side, won their fourth LaLiga fixture in a row, which saw them overtaking Real Madrid and are now sitting at the top spot in LaLiga with one point to spare ahead of their rivals.

Real Madrid’s start to 2019/20 season was nowhere near perfect, and while there were some aspects they needed to improve on, it would be safe to say Zinedine Zidane’s men had a decent start of the season. That being said, the whole thing changed this weekend, when Real Madrid suffered one of the most humiliating defeats in their history. Ok maybe, it was not the worst defeat in the history of the club, but it’s surely up there among the most painful defeats in recent years. The match was fairly one-sided in terms of ball possession (37-63), which was expected, yet it was Mallorca who scored the opening goal of the match in the 7th minute. While that alone was not a reason for concern for star-studded Real Madrid, who were expected to bounce back rather quickly, the pressure grew with each passing minute, with Zidane’s men failing to find their way to the net. The visitor’s shooting was just disastrous, seeing how Real shot the ball 4/13. And while it was far better to what Mallorca produced (1/5), it was nowhere near good enough for them to bounce back. That being said, Real Madrid had a fair amount of chances, but none was converted into a goal. What made the whole ordeal even worse was the sending off of Odriozola who earned his second yellow in 74th minute, which more or less sealed the deal for Real Madrid, who are now sitting second in LaLiga standings, with a 5-3-1 record and 18 points.

Barcelona rolling over Eibar to claim their sixth win

Unlike Real Madrid, who disappointed with their performance, Barcelona lived up to the expectations with a solid 3:0 win over Eibar on Saturday, October 19. The opening goal of the match was scored by Griezmann, who netted his fourth LaLiga goal of the season in 13th minute of the match.

From that point onward it was Barcelona who were in charge of the match and came extremely close to scoring their second goal of the match, however, Messi got denied the chance by Eibar’s goalkeeper, who took the ball right of his feet. That meant the teams entered the second half with one goal apart, giving Eibar a chance to bounce back, however, they failed to do so. Instead, it was Barcelona, who scored their second of the match in 58th minute when Messi found his way in front of the net and scored his second goal of the season. Suarez made it 3:0 in 66th minute after a fast counterattack, which left Eibar’s defence and goalkeeper helpless, as they watched their ship sink in front of the home fans. Not a lot has happened in the remaining minutes, which suited Barcelona, who ended the match with a dominant 3:0 win. It was their fourth consecutive league win and their sixth so far into 2019/20 season. That was more than enough to push them past Real Madrid, who disappointed against Mallorca, who handed Los Blancos their first L of the season.

Atletico took only one point against Valencia

While Barcelona and Real Madrid fight for the top two spots, Atletico Madrid started their decline from the top of the league, by producing an underwhelming 1:1 draw with Valencia on Saturday, October 19. With that Atletico Madrid’s record shows a 4-4-1 record, which on its own is not bad, however, they are obviously in terrible shape, seeing how they won only one out of their last five, with the remaining four ending in a draw. At this point, it’s worth noting Atl. Madrid drew with Celta Vigo, Valladolid and most recently Valencia, which are all teams Simeone’s men should have defeated with relative ease if they are serious about fighting for the title. Other than that, Granada managed to win their fifth match of the season against Osasuna (1:0), which keeps them firmly in the top four, whereas Real Sociedad managed to bounce back from their two consecutive defeats, with a win against Betis (3:1), which means they are now tied with Atletico Madrid and Sevilla at third. However, due to stronger GD, they made a breakthrough into the top four. 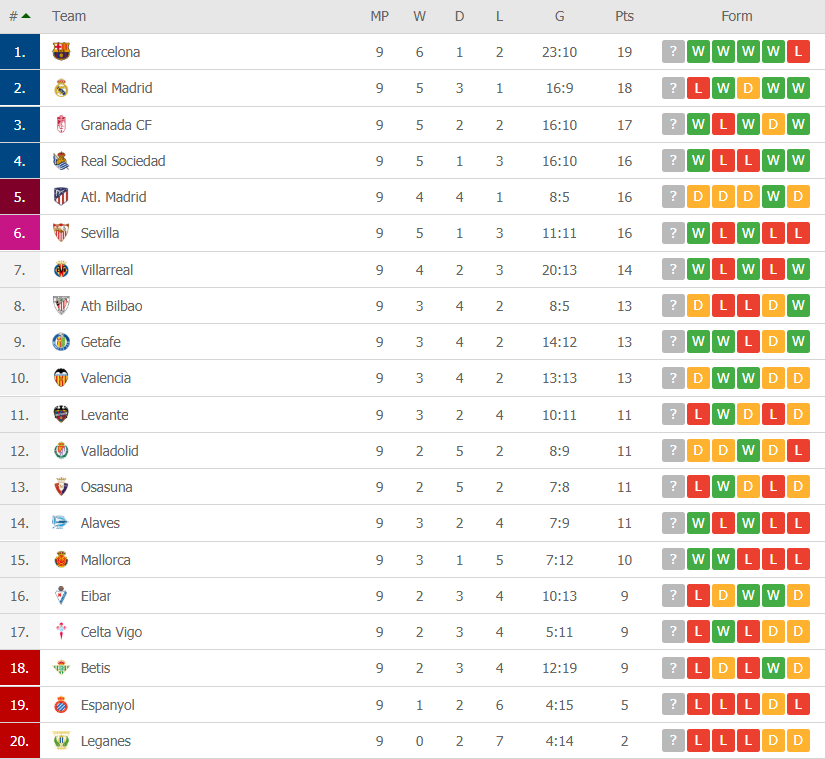 With Real Madrid dropping the ball against Mallorca, they have been pushed down to second and replaced by Barcelona as the new league leaders. While Zidane’s side can’t be too happy with what they have shown, the title race is still far from over, seeing how there is only one point separating Barcelona and Real Madrid only nine rounds in. That being said, even the top dogs are not in the clear, seeing how Granada sit third with 17 points and Real Sociedad, Atl. Madrid and Sevilla at fourth, fifth and sixth place, all with 16 points. As it seems now it will all come down to how consistent Real Madrid and Barcelona can be for the remainder of the season. Atletico Madrid on the other side have a lot of catching up to do, seeing how they dropped in a form significantly since the start of the season. And while they are only three points behind the league leaders, their performances suggest that the gap will only increase as time passes.