The Catalans have beaten Bayern Munich for the signing of USMNT midfielder. 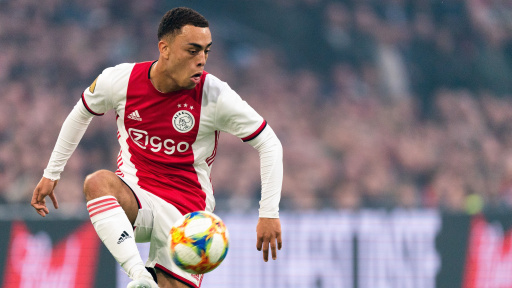 Barcelona have signed Ajax right-back Sergino Dest after agreeing to a fee of 21m euros. The Catalans have fought tooth and nail with Bayern Munich for the transfer of the USMNT star. Dest, who has signed a new five-year deal at the Nou Camp, is set to replace Nelson Semedo, who recently joined Wolves.

Dest burst on to the scenes following his breakout season with Ajax last term, eventually racking up two goals and six assists. He also made his debut with USMNT last year.

FC Barcelona and Ajax have reached an agreement for the transfer of Sergino Dest. The cost of the operation is 21 million euros plus a further five million in variables.

“The player will sign a contract for the next five seasons, through to the end of the 2024-25 season, with a buyout clause set at 400 million euros.

“Sergino Dest combines many excellent qualities needed in a full back: attacking when called for, solid defensively, unruffled in the possession and creative with it.

“The defender has the ability to take players on and his pace is a virtue going forward and defending. Those qualities will be on display from now on in a Barca shirt, a challenge for a fearless young full-back.”

Ronald Koeman also spoke about the 19-year-old in the press conference ahead of Celta Viga clash.

“Sergino is doing the medical checkup and you still have to sign. Until I sign I prefer not to talk much,” but later let go a little more: “We’re going to have a young side. It’s also a matter of changing things for the future.”

Dest also stated that Koeman’s presence one of the main reasons for his reason to sign for the Catalans.

“I chose for Barcelona because they have a Dutch coach, their right-back just left… In general, I feel like I can have more minutes at Barcelona.”

The Young defender also expressed his desire to link up with Barca skipper Lionel Messi while stating that the Argentine wasn’t the reason for his transfer to the Nou Camp.

Dest, who is known for his athleticism, dribbling prowess and the attacking instinct, is soon expected to take up the place of Sergi Roberto in the first-team. He is also expected to make his debut against Sevilla this Sunday.