Round 17 of English Premier League is only days away, meaning it’s once again time for our EPL Fantasy preview, where we show off our fantasy team, share what are our plans going forward and reveal which changes we made compared to last week. In GW16 we earned a season-high 77 points and we will do our best to match or even surpass the bar we have set for ourselves. 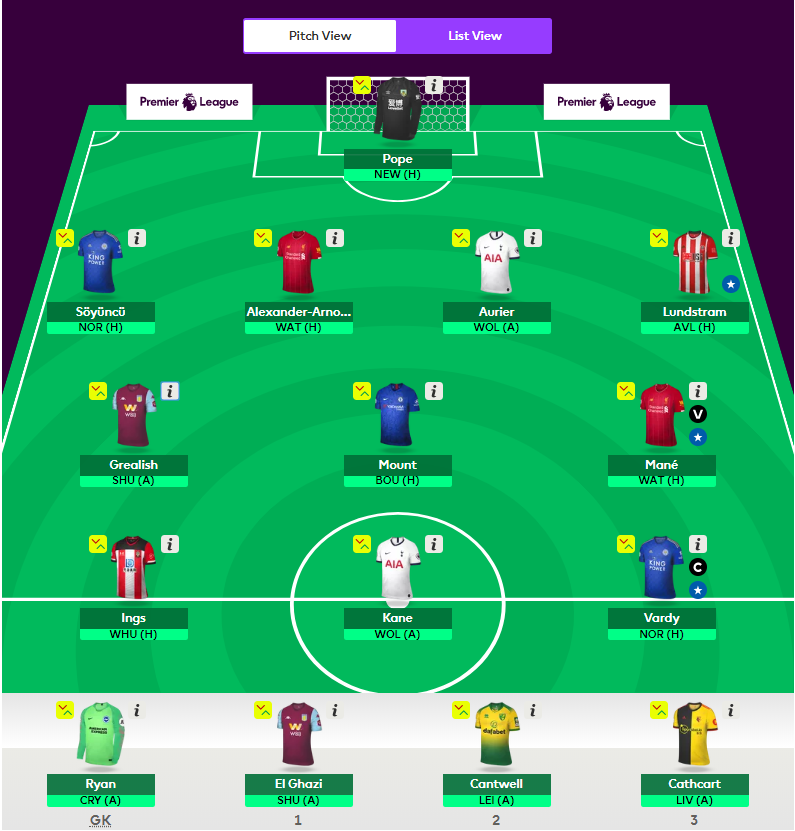 Last week we had Ryan as our goalkeeper and while he did not earn a significant amount of points, he performed well enough considering the circumstances. This week, however, we are switching back to Pope who will defend his goal against Newcastle on home ground, suggests he will do a better job compared to Ryan who will face Crystal Palace in an away game.

We have decided to use up our two free transfers on our defensive lineup, swapping out Digne and van Dijk for Lundstram and Trent Alexander–Arnold. While van Dijk impressed with his 17 points in GW14, he failed to impress throughout the season, which led us to swap him out for Alexander-Arnold who has been far more consistent with his performances. Digne on the other side earned only 43 points this season and has seemingly dropped in a form significantly in recent matches, seeing how he accumulated barely five points in the last five. For that reason, he was swapped with Lundstram who has been one of the best defenders in the league and there is no reason to believe he will underperform in his clash with Aston Villa this game week.

Both Trent Alexander-Arnold and Lundstram will play for our team this Game Week alongside Aurier and Söyüncü. Aurier will clash with Wolverhampton which won’t be an easy match, however, with the recent improvement of Tottenham and dip in form of Wolves, we have high hopes he will be able to deliver and earn us some points. Söyüncü will clash with the struggling Norwich, which again suggests he will earn some points. As for Alexander-Arnold, he has accumulated three assists in his last three fixtures and we will hope he can add one more against Watford who will travel to Anfield for a very tough match against the high-flying Liverpool.

In our midfield, we have Grealish, Mount and Mane. Grealish is coming off a solid performance against Leicester, where he scored his fourth goal of the season and his second in the last three weeks. Whether he will able to see the same success against Sheffield United is anyone’s guess, however, with the players we have in our roster, he seems like the optimal pick here. Mount has been slightly underwhelming in the last couple of weeks, seeing how he scored only once in the last four. That being said, we can expect Chelsea to do their best against Bournemouth, especially considering they have failed to impress with their performance in recent weeks. Mane as our third and last defender skipped Liverpool’s last fixture against Bournemouth but is expected to return for Liverpool’s meeting with Watford, where it’s safe to assume Mane will put up some nice points. That being said, he won’t be our captain for this week, as we feel like Vardy is a better option for GW17.

No changes in our attacking lineup, meaning we are entering GW17 with Ings, Kane and Vardy. The trio impressed last week and earned us 50 points, with Ings contributing eight, Kane 16 and Vardy 26 (doubled). For this week we expect something similar or even more considering they all have very favourable fixtures ahead. Ings will clash with West Ham United at home where we can expect him to add another goal to his record. Kane will clash with Wolverhampton which won’t be an easy match, as stated before, but it’s worth noting Wolves conceded twice against Brighton last week which suggests their defence is not as solid as we would expect. Vardy, as our last striker will look to do some damage against Norwich, who have been far from solid in recent weeks.

Norwich conceded twice against Sheffield United last week, twice against Southampton a week earlier and twice against Arsenal in GW14. It’s also worth noting Norwich are the worst away team in the league (1-1-6). In their eight away games, Norwich conceded eight goals, four in their last three fixtures. All things considered, Vardy should so some damage here and for that reason, he is our captain.

In our substitutions, we have got Ryan, El Ghazi, Cantwell and Cathcart

All in all, we are happy with how our team looks ahead of GW17. The only concern is Grealish, who will have to meet with Sheffield United, other than that, we are expecting solid points from all players. We have a lot of expectations for our strikers who all seem to be in excellent form ahead of the next week. Will they deliver once more is anyone’s guess, but to be completely fair another 50 points is not entirely out of question here.