English Premier League is set to enter round 12 this Friday, November 8 with a fixture between Norwich and Watford, followed by a handful of other exciting matches in the two days that will follow. While any EPL round can be described as exciting and thrilling to watch, this weekend, we will see a long-awaited clash between Liverpool and Manchester City, which will prove to be the and most challenging fixture of the season for Klopp’s men who will look to keep their undefeated streak alive. What does this fixture mean for the EPL title race is anyone’s guess but we are not here to discuss that, but rather take a look at our Fantasy team, Fantasy EPL tips and our plans for this week. So without further ado, here is our FPL GW12 preview. 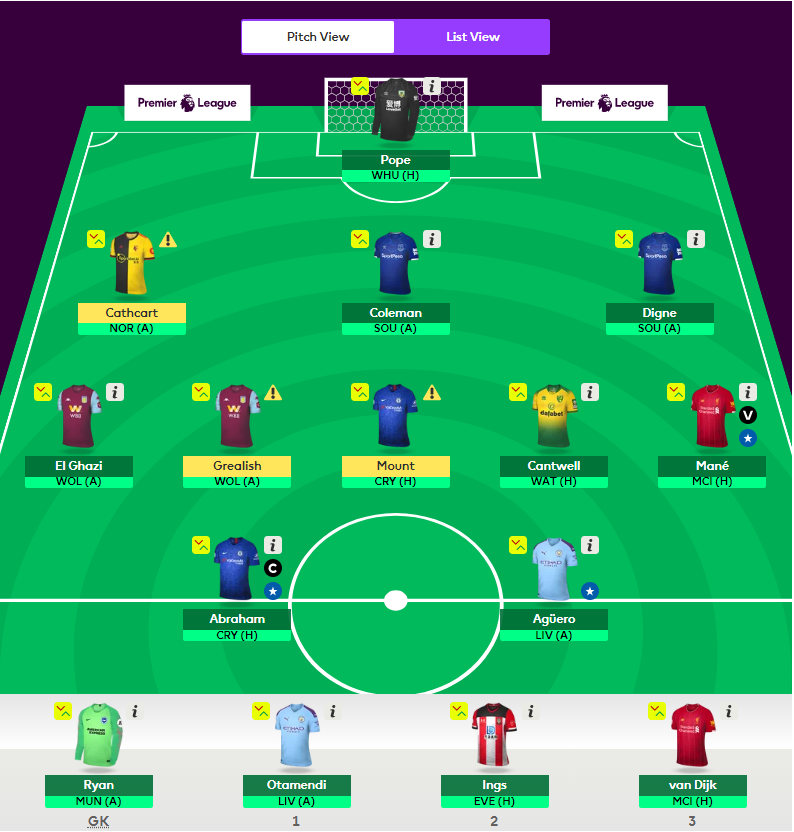 Pope or Ryan has been the main question we asked ourselves when picking our goalkeeper, and while the decision was not always easy, it’s fairly easy to pick a side here. Ryan will face off against Manchester United, who despite not producing the most promising results so far are still a team we don’t believe should be underestimated. At home, Manchester United scored eight goals in the last five fixtures, which is a reason enough for us to avoid picking Ryan and rather side with Pope, who will defend his net against West Ham. At home, Burnley kept a clean sheet in three out of their last five fixtures, with the only two exceptions being bouts with Liverpool (0:3) and Chelsea (2:4). With that in mind, we can trust Pope to deliver against West Ham, who don’t look to sharp heading into GW12.

In our defensive lineup, we have decided to pick Digne, Coleman and Cathcart and decided to keep both Otamendi and van Dijk out for obvious reasons. Cathcart and Watford will clash against the struggling Norwich, which gives us a nice opportunity to earn some great points, while Digne and Coleman get ready for Everton’s meeting with Southampton. In this clash we can expect Digne to do some damage in the offence as well, seeing how Southampton conceded 19 goals in the last five home games due to their iffy performance in the back.

We will enter GW12 with El Ghazi, Mount, Grealish, Cathcart and Mane as our four midfielders. El Ghazi and Grealish will travel to Wolverhampton where they will meet with Wolves who produced a mixed bag of results this season. And while they did put up some solid results so far, we would not be surprised if Aston Villa can do some damage in the attack. Mount will look to leave a mark against Crystal Palace, who are expected to struggle in their visit to Stamford Bridge, seeing how they conceded nine goals in their last five away fixtures and should Chelsea get an opportunity to score, we can be sure Mount will be right there to contribute something. Mane will remain in our lineup for Liverpool’s fixture against Manchester City, simply due to his incredible form this season. He was the main man behind Liverpool’s win against Aston Villa and we believe Mane can deliver here once more. Cathcart will play against Watford, and while we don’t have much hope Norwich can impress there, we have decided against spending four points to swap out Cathcart this GW.

We felt like we gave Pukki more than enough chances to find his form, and seeing how he failed to do so, we decided to swap him out for Ings, who will get a chance to prove his forth comes next gameweek. We could have waited and transferred Ings into our team next gameweek, but we have other plans for the future. Seeing how Southampton will clash with Everton, Ings will remain sidelined for this week.

With that in mind, our attacking lineup will consist of Aguero and Abraham. Man City will clash with Liverpool in what should be a thrilling match. That said, we can’t expect too many goals as neither side will want to risk too much. For that reason, we decided to take the captain armband from Aguero and passed it to Abraham, who we trust will do some damage to Crystal Palace. He has strong form and there are no reasons why we should not take this opportunity to double his points.

In our substitutions, we have got Ryan, Otamendi, Ings, and van Dijk.

And just like that, we have come to the end of our EPL Fantasy GW12 preview. We have implemented some changes, and we have some more in store for the future. Pukki has been transferred for Ings, and while Southampton’s striker won’t be in our team this GW, the Saints have a very promising schedule ahead, which we believe should give our new addition plenty of opportunities to show off his worth.