Ole Gunnar Solskjær’s team created better chances but failed to convert them while Sevilla had few chances but made sure that they count. 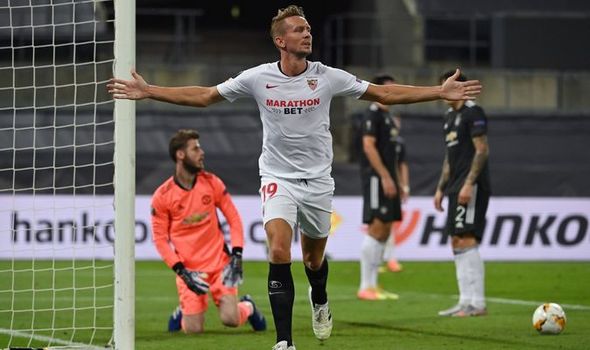 Jose Mourinho’s Manchester United were knocked out of the Champions League in 2018 by Sevilla and now Ole Gunnar Solskjaer was against the same team. Though the competition and circumstances were different but not the result.

The Red Devils again tumbled in the semi-final of competition as they were eliminated from the FA Cup in the semi-final as well. Solskjaer’s inexperience as a manager in big European games was quite evident also luck was not on his side as well.

The decision to start Fred over Matic was questionable. The experienced Serb would have provided the necessary protection required to Brendon Williams and he would have disrupted Ever Banega from running the game for Sevilla. Williams constantly found himself isolated against both Navas and Suso on the left-wing and both Seville goals came from that side. It was a strange game of football while the Spanish side had more possession but they hardly created many chances. United had less possession but they created better chances than Sevilla.

United started the half very well and Sevilla looked a little nervous but then the Ever Banega managed to pull the strings for them in the midfield. The Spanish side looked more clam after that but in the 6th minute, Manchester United were awarded a penalty. Martial managed to find a pass to Rashford, the Englishman’s shot was saved by Bono, however, Diego Carlos’s follow-through tackle caught him and United were awarded a penalty.

A VAR check was done and the referee’s decision was upheld. Bruno Fernandes made no mistake from the spot to give United the lead. Sevilla then increased the tempo of their game and they were moving the ball around quicker changing wing from left to right.

While the Red Devils were on the back foot and looked to attack them on the counter. Man Utd’s resistance was broken in 26th minute with Suso scoring the equalizer. It was a very well-worked goal by the Spanish side with brilliant passing and some good work on the left by Lucas Ocampos. Sergio Reguillon followed up with a pass from Ocampos and drilled in a low cross. Brandon Williams did not mark Suso who was left free and he placed a shot in the left-hand corner out of De Gea’s reach.

After that, both teams tried to pass and build from the back but could not and they giving away possession. However, United created better chances but failed to convert them.

Sevilla were bombarded with attack after attack from Manchester United in the second half. As soon as they cleared the ball it would come right back at them. Almost for the first fifteen minutes, the Spanish side were struggling to get away from their own half.

Big credit has to be given to Sevilla’s goalkeeper Bono for making some great saves. Martial had the first chance of the half when Jesus Navas slipped when a ball came inside the box. The Frenchman hit his shot with power hoping it would go in from a close range but Bono managed to save it. Then Fernandes pass found Greenwood and he tried to finish with his right foot while the ball was bouncing but Bono again saved it. Then again Martial did some fine work on the left to cut it back for Fernandes but at least 3-4 Sevilla defenders jumped on to it to stop the shot.

The best chance of the game fell to Anthony Martial when he was in a one on one situation with Bono. Former Monaco forward tried to go past the Sevilla keeper but his left leg stopped the ball. As soon Bono made the tackle the ball went spinning slowly towards Sevilla’s goal but it was cleared by Kounde. After that, the Spanish side were given some room to breathe. Los Nervionenses had a shout for a penalty after Burno Fernandes elbow obstructed a Sevilla freekick but after VAR check no penalty was awarded.

Finally, in the 77th minute Navas found himself alone with Williams the experienced Spaniard managed to go past the United left-back and delivered an inch-perfect cross.

De Jong found himself between Lindelof and Wan Bissaka and he tapped in Navas’ cross past a helpless De Gea.  After that United tried to attack Sevilla but they were determined to not let them score and Red Devils failed to score as the game finished 2-1.

Manchester United manager Solksjear was in a reflective mood as he wants his side to show consistency in possession by creating good chances. He also pointed out that his side missed many chances and they should have scored more goals and killed the game.

He said: “We should have, could have scored quite a few. Some spells today may be shown this group of players will have to learn + get consistency in their play. When we got the ball down it was scintillating at times. The keeper has had a fantastic game. The whole run-up to the (winning) goal is disappointing”.

Juan Lopetegui’s substitution made the difference for his team and this highlighted that United need more depth in their squad as well. While Victor Lindelof and Wan Bassaka have been criticised for poor defending as well.