Manchester City vs Real Madrid was a highly anticipated game as the Champions League returned with Pep Guardiola and Zinedine Zidane going head to head once again. There was more excited about the game as Real Madrid needed a win as they had lost the 1st leg at the Bernabeu 2-1. The game was a tactical feast with both teams trying to press and create space to score goals. 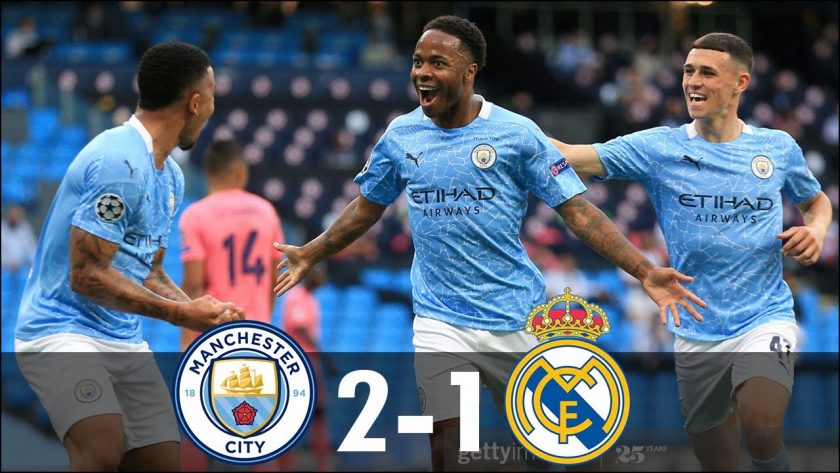 Both teams started with a 4-3-3 with Phil Foden a surprise inclusion as a false nine. Real Madrid started the game with more possession as they tried to start play from the back. Toni Kroos and Luka Modric tried to run the game but Manchester City were very well organized.

Pep Guardiola’s side very calm as they pressed Real Madrid very well. Real Madrid were finding it very hard to play from the back as City were so good. Finally in the 9th minute there pressing resulted in an error from Varane. Gabriel Jesus played on the left as he did in the first leg. The Brazilian pressed the Frenchman on the right side of Madrid box and he was successful is dispossessing Varane and a simple pass to Sterling made it 1-0 with the score now being 3-1 on aggregate.

However, Real Madrid did not lose hope as they still needed two goals to go level on aggregate and take the game into extra time. The experience of players like Benzema, Modric, Kroos and Casemiro helped Los Vikings and they continued to play from the back. They did create a few chances but Benzema never really managed to test Ederson but in the 27th minute, a ray of hope came for Real Madrid. Rodrygo found some space on the right to swing in a cross and his cross was met by the head of Benzema with the score now being 1-1 on the night and 3-2 on aggregate. Manchester City also had some good chances but failed to capitalise on them.

At the start of the second half, Manchester City were the better team as they created better chances but again lacked the end product. Los Blancos were lucky to not to concede but in the 67th minute their luck ran out as Varane committed another error to give City their second goal. The ball was bouncing and Thibault Courtois came forward to receive the ball. Varane header was not strong enough to reach the Belgian with Jesus chasing the ball. Courtois was caught in no man’s land and Jesus took full advantage to score City’s second. Zinedine Zidane ‘s side looked to respond immediately and they started to play with high intensity but they soon ran out of fuel as now they had to score two goals in a short period of time.

Guardiola played smart in this game, he knew Real Madrid would bring the game to his side and thus he positioned his team to press with intensity. The inclusion of Phil Foden was also a surprise as the Englishman performed very well. While Zidane’ selection of Rodrygo was questionable given that Marco Asensio was match fit and available. Eden Hazard also failed to lit up the game as he struggled to make an impact. The former Chelsea star injury problems have been evident this season and probably he was not ready to play this game. Again it would have been better to start with Vinicius and then bring on Hazard. Perhaps the calming presence of Keylor Navas was also missed by Zidane alongside his captain Sergio Ramos who was suspended. Questions have to be raised at Thibault Courtois’s distribution and communication skills as well. Manchester City will now travel to Lisbon to take on Lyon in the quarter-final in a single knockout game.